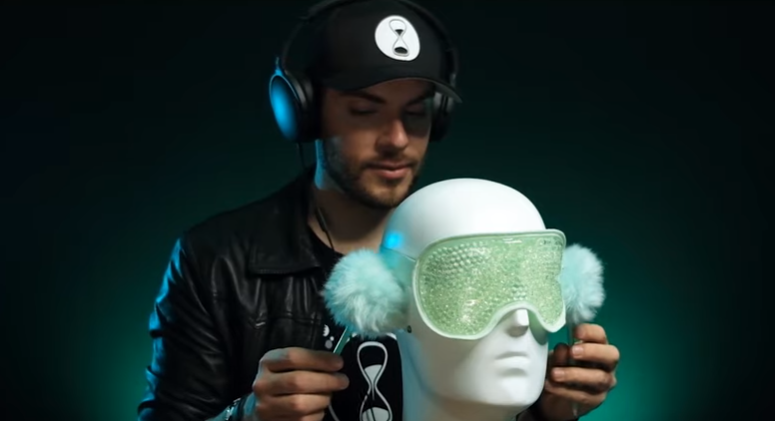 asmr – Where to draw the line between rainfall and pillow humping?

It’s been over a decade since the phenomenon of asmr began whispering over the world’s shoulder, softly tempting millions of people to a toe curling tingle or a lull of deep chill.

While for many, it’s just boring or even irritating, every day millions of fans seek out that asmr feeling and it’s no longer just to help them sleep.

As of mid 2020 there were over 2m searches per month on Google and over 11m/ month on YouTube for asmr content. Those numbers spiral upwards depending on what you choose to include. Here, there are no clear lines to be drawn, so let’s hush down and look closely at the subtle details. (and yes, it’s asmr not ASMR, shouting is not welcome here).

Firstly, we can set aside the purely soothing material such as certain wavelengths of static noise (blue, brown, white etc) or waves on a beach. Together with those, let’s exclude the mind-numbing curiosity of things like hydraulic presses, puzzle solving, cooking and woodworking.  Although the relaxation these provide can be a great precursor, the best way to enjoy them is probably as you drift off towards sleepy clouds.

What sets those apart from the largest subgenre is intimacy. This is usually achieved with a stereo microphone, a young hottie, and a scratching, tapping, or crumpling sound (or stroking, rattling, rubbing, squishing, licking etc, honestly this list is really endless). Gibi, Maria, and Zeitgeist are among the best known a(sm)rtists, but YouTube is home to a great many asmr stars, boasting millions of subscribers, and billions of views. Cosplay, unboxings and pseudo-medical are among the most popular themes but the list is truly endless.

Most asmr fans would enjoy the crispy sound of a scalpel passed over a sugar cube inside of an igloo. But add in some whispering or the fluttering of lips, and you now have a decently defined category of sexual inspiration. A cowboy softly speaking about your life together on the open plains is the sort of erotic literature that has been around for years. While a hairdresser whispering about your head and how they will take care of it is relatively new, but it’s a niche that is growing every day. For hardcore asmr fans, whispered intimacy can elevate almost anything to sexual content.

Whatever your feelings on the subject, there is no doubt that asmr is going to continue to be embraced by more and more fans around the world. It’s unique physiological appeal grants it a universal access that most fetishes and genres simply cannot compete with. When even the mundane task of brushing hair or folding sheets can be elevated to soul soothing feel good vibes, it’s clear that asmr can blur the line between NSFW and Not like nothing else.