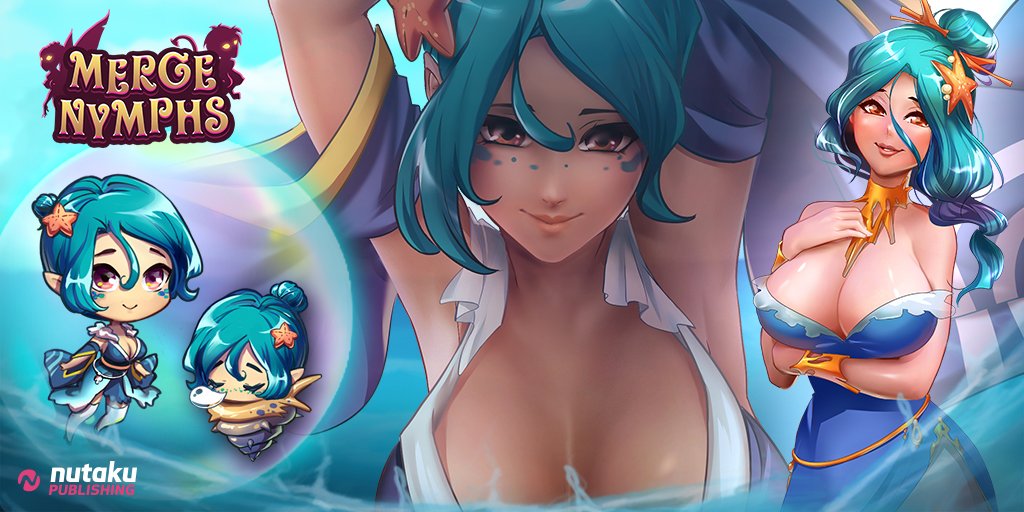 A rare kind of relaxing game has arrived at Nutaku.

No more running out of blocks to match 3 or being short on damage for a tough fight.
Merge Nymphs has you chilling out on some floating islands combining items, while nymphs flash you some titties after you combine enough penis candles. (ye, that’s a thing )

No death timers, no limited turns, no annoyances. You wanna move one item, then your girlfriend just spills some water on her shirt and that takes you off the game for two hours, fine – then come back and move the next one – have it at your convenience. You don’t know what the items do yet? Take your time – you can try em all out. The area has a lot of things, you can’t see how to solve it yet? Explore it, there is no punishment if you misstep. Just keep combining them dick candles and it’s going to work out.

I would have preferred tittie candles, but fine 🙂
There are plenty of girls that take their panties off, many static images, some animated. You don’t have to go deep to get to them.

They probably bought the game from someone as the themes really aren’t built for it, and the girl features could easily be a later addon. The majority of graphics are pretty cool and oddly enough the girls take a slight dip in quality as can be seen – their color and light work is noticeably poorer than a variety of objects in the game. Overall everything is pretty good, this just affirms that most likely the girls have joined the party after the game was initially completed.

Seen as how pretty it is, I thought this old laptop would have trouble running it, but apparently, it is also well made, which is a rarity these days. It’s like one of those sexy girls, that is also smart, but lacks the shitty attitude they usually get. A cool breeze on a hot summer day. Given that many play such games in between things, I assume the lack of pressure is welcome for people that want to relax in their smoke break and maybe see a cartoon pussy or two.

The only major drawback is the energy system, where they kick you out of this chill-out island party every now and then. You obviously have to pay if you want to get back in right now.
Which is odd, considering this game could easily be built to have insane amounts of content, and players could mostly pay to acquire a larger variety of girls.

There is no reason why you shouldn’t be able to combine objects for hours at a time, so long as you can’t get too many girls or stories. Solitaire doesn’t continue to exist because there is a fascinating story progression or a fabulous sex scene down the line. People just like fiddling in the mechanical play for notable stretches of time. This clear line of opportunity is missed here.