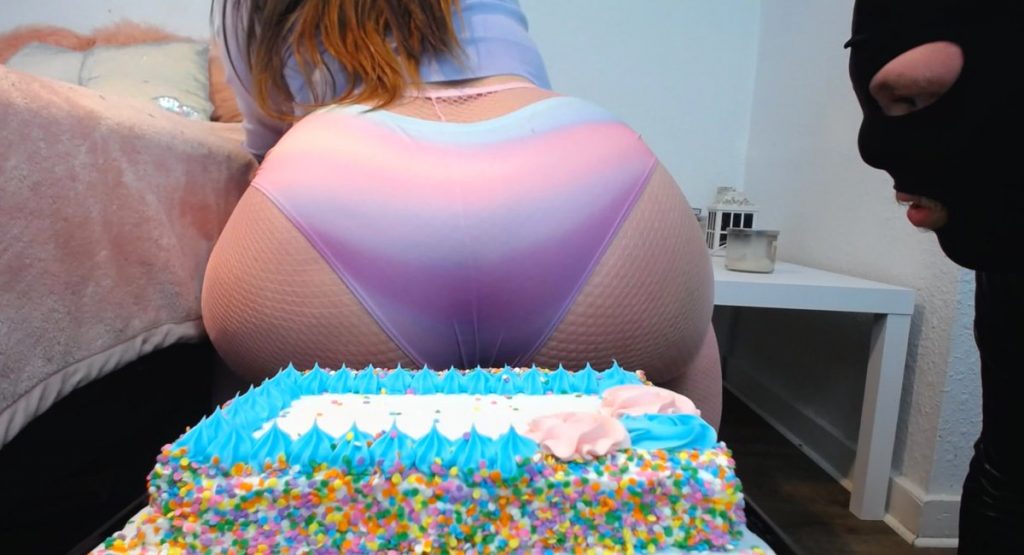 The first question you may ask is, why? Why would anyone do this? Who could hate dessert so much that they would want to see it destroyed like that? It turns out, nobody’s certain, but what is for sure is that more than a few people do. Wet and Messy fetish is a genre that covers a lot of fun, from sploshing food, to mud wrestling and now quite fashionably, cake sitting. Think of strawberries and whipped cream, only they’re 3 miles behind you as you’ve gone deep into a world where logic makes no sense. Yogurt replaces massage oil, custard is shampoo, chocolate sauce can be lube and don’t even ask where the cupcakes go. Mud, paint, and all sorts of goo’s are welcome, as long as it would make the cleaning lady quit on sight! Interestingly, there are no rules about nudity either, and a lot of content is technically PG and found on YouTube such as Sit N Squash and Splosh! (technically this one’s not cake, but a quick peak at the comments will prove, these fetishists aren’t messing around)! And it’s not hard to guess why it somehow works. We have all at some point played with our food and squished stuff through our fingers and toes. There’s pleasure to be had from squishing things, and a tactile reward for something playfully naughty smeared all over you. And, to be fair, there are plenty of butts out there that deserve to be on camera, with pie or without! Bringing more attention to the *Artform of it are people like Lindsey Dye who combines cake destruction with karaoke singing and doesn’t hide away behind a camera either, being a stage performer above all.

It’s not absent in the mainstream either, with reality TV’s Lady Gang, and superstars like Lady Gaga, and Sarah Silverman all acknowledging there’s something. While on subreddits like r/messyporn the discussion is still very much baking as to whether it’s goofy or hot, the monthly paying subscribers to cake fetish artists on OnlyFans kinda should settle any remaining doubts. Sploshing is nothing new either, and cakes have always been involved. In the UK, WAM enthusiasts have had a home for decades, at least as far back as 1989’s first publication of Splosh! magazine. But with the modern tools that fans and performers have at their disposal, it looks like more and more cakes will fall victim to death by buttcheeks. Take upcoming star Indigo White who regularly mixes in cake amidst her cosplay and cuteness. And if you don’t know what’s the fuss about bathing in Mountain Dew and Doritos, you’re clearly not paying attention. So why not? Well, aside from allergies, we can’t think of any good reason. Some may complain about food going to waste but it’s safe to say that in the global battle against hunger, this fetish is not a main ingredient, and again, it doesn’t have to be either sat or swallowed. Watching a naked adult sit on a cake and proceed to grind it into mush, is something you’re either into or not. And it’s not just watching that can feel good, as many performers will tell you! But fans can rest at ease knowing that the internet has blessed them with thousands of clips and pics of their favourite flavour of frosted fun, and they’re getting more creative over time as the war between buttcheeks and baked goods continues. Stay Home, Stay Safe, Sanitize, but nobody said anything about squishing food with your bum.