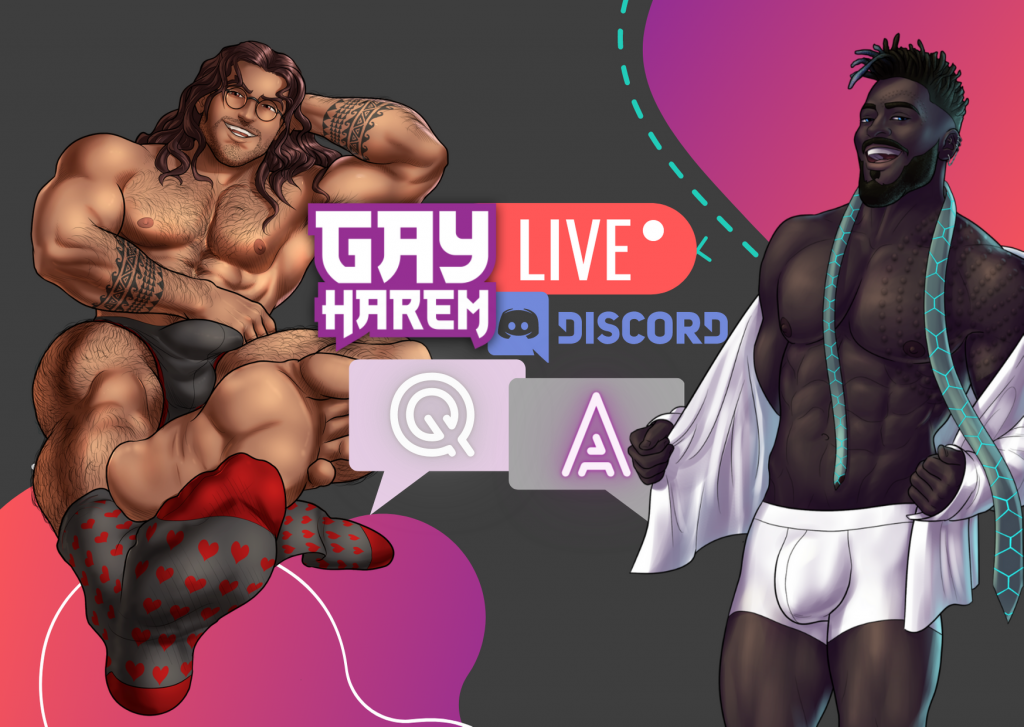 Last week, Gay Harem had its first live Q&A session on Discord. Players had been asking for one for a long time and we decided it’s time to get into it. After an open vote which lasted for about a week, our players decided they’d like the first Q&A session to be with a representative of the Art & Content team.

The Q&A took place on Friday the 19th in our Discord server and was one hour of informative fun. We’ve decided to share the Q&A here as well, so that more people could find out what we talked about.  In order to be true to the original experience, grammar and punctuation haven’t been edited. This is raw info from the source!

Q: I have a question regarding temporary Places of Power there were 4 other pics we saw when they were announced, but so far only 4 PoPs are available, what happened to the others?

A: The pictures are up in the game, their appearance is up to Game Design. ^^

Q: Are you going to add new daily missions from HH game?

A: There is no final decision on that, but I would say yes.

Q: In light of the recent announcement for HentaiClicker, will GH receive counters for the Clicker girls that will come to HH, or is this not yet decided?

Q: Will you translate GH in to Russian language?

A: There are no plans for that at the moment, but if enough people suggest it, it may be worth looking into. It’s up to the popularity of the game in Russian speaking countries.

Q: about 1* recruits…people are worried that parodies they want might not get a proper representation on the game, are you taking that into consideration?

Q: Also in regards to the clicker ending and the harem being transferred over to HH(Since Finalmecia is available there). Does that mean there is hope of getting art for trolls like her GH counter Edernas added to our harem?

Q: If the 1* recruits are popular on exit poling is that information used to affect the likelyhood of (similar)variants with additional poses?

A: Thank you for the feedback. We’re trying to include a variety of body times. ^^ Twinks will not be forgotten!

Q: Is there a rough ETA available for the next wave of Troll Tiers?

Q: about 5* upgrades… – are there still plans for upgrading troll guys to 5* ? – also, back in 2018, some event girls in HH were updated to 5* , is that idea completely scrapped or can we expect more recruits to become 5* at some point?

A: I can’t answer to both your questions at the moment. ^^

Q: How many artists are drawing the story and is it possible to speed it up to catch up with HH?

A: I can’t say the exact number of artist, but for the sake of smooth production we’ll always be a bit behind on story.

Q: Are there plans to complete updating Bunny alts to match the new Bunny?

A: Can’t answer this question at the moment. ^^

Q: Is the world 1 remaster still in the works or was that cancelled?

A: The remaster is not happening for now. The only change that will happen is the change of Bunny so the story is whole again. ^^

A: There are technical limitation that we can’t bypass for now.

Q: Now that we have all 3 PoPs, does it mean that absent exceptions like the 1-star guys and things we still need to catch up on, we’ll always get all new contet HH gets at the same time as they get them?(edited)

A: I can’t say for sure. This is a real broad question.

Q: Are there any plans to have parodies of celebrities instead of fictional or historical guys? I know HH got a parody of Cara Delavinge the actor.

A: The character you’re referring to is a part of a legacy event, and you will get its counter in GH. Can’t say more. ^^

Q: how limited and tied by HH’s story are you? like, is it possible for big changes in the story-line?

A: Big changes can’t really happen. The only time we change scenes is when it’s impossible to adapt it without doing so.

Q: About that smooth production, thanks for many of the guys you guys are giving us, but there’s been loads of talks about the drawings that seems to come from the same person. He did Xmas Bunny, Val Jino, Eros and many others… the art leaves a lot to be desired compared to many other guys, with the Main Character looking terrible on his art, so… Are you guys planning to edit those guys eventually?? coz they are truly a sore spot on the eye and seems out of place.(edited)

A: The drafter you’re referring to does not ink anymore for the game and there is no redraw planned yet. ^^

Q: How much freedom are artists given in making art? They are obviously given a parody character but are all the poses, scenes, even body types to some extent (e.g. do I draw someone slim or more buff) completely free licence?

A: Nice questions, but I can’t really tell you that. ^^

Q: ¿Do artists even compare or share each other works in progress or each one work individually and directly with whoever supervise ’em w/o knowing what the others are up to?

A: We can’t go into specifics on that, but our artists know each other and love to kiki ^^

Q: Are you planning to add furry guys?

A: Gay Harem doesn’t plan on focusing on the world of Furry

Q: one of the things some of us is worried about is this new “comic super hero/american style” game coming for the straights, does that mean HH will focus more on anime/manga? and if that’s the case does that mean GH will lose on potential comic/western superhero parodies because of this?

A: It’s too early to speculate about that, but I would advise you not to worry too much about it

Q: Can we expect more events with story characters like from Cameo 2 event that gave us Refias, Shoyu & Gerart? There are some really great guys who are also male in HH that I’ve been hoping we’d get some day and it would be nice to know they were possibilities, such as Ichigo

A: There are no such plans for now.

Q: Will there be more parodies of series such as Fire Emblem or ARMS, or more fighting game parodies? How does the process work for selecting who to parody?

A: Maybe, maybe, maybe. We love fighting games. We will add our faves. ^^ (can’t answer about the second part

Q: as there is really no reason why GH guys would have to mirror HH girls exactly (parody from the same anime), what about taking suggestions for popular male characters and substituting a few of them for girls that can’t be ported well?

A: Of course there is a very sturdy and valid reason the games must mirror. ^^

Q: Are there still plans for updating past Ulrich who just mirrors future Ulrich with short hair?

A: That was long before my time. Need to look into that.

Q: What happend to the artist who drew Benjamin and the others? He was my favorite artist and now he’s gone?

A: He’s working on personal projects. We still love him and miss him.

Q: Are there any current plans on updating the art of older guys or is that on the backburner for now?

A: Can’t say at the moment.

Q: Seems to me content related, if not delete plz but ¿can we have a popularity chart of all the guys? ¿Or a most/less owned guys server wise?

A: That’s not for Art & Content. Community Management has done popularity surveys in the past. But we haven’t shared statistics on owned guys and popularity according to amount of players who own a specific guy. It’s a cool idea!

Q: are all of the GH artists dedicated to GH or can you use some HH artists occasionally?

Q: Question about OD missions, I think right now it’s the first five missions that are being used, would it be possible to make it the final five instead? That way we’d see how the event ended rather than started

A: It’s not possible at the moment due to technical limitations

Q: When are we getting more customisation for the MC profil?

A: Nothing new planned at the moment.

Gay Harem’s first Q&A session was an absolute pleasure for us at Kinkoid and we hope our players found it useful as well. It looks like it certainly won’t be the last Q&A Session. We will announce out plans for a second session soon <3