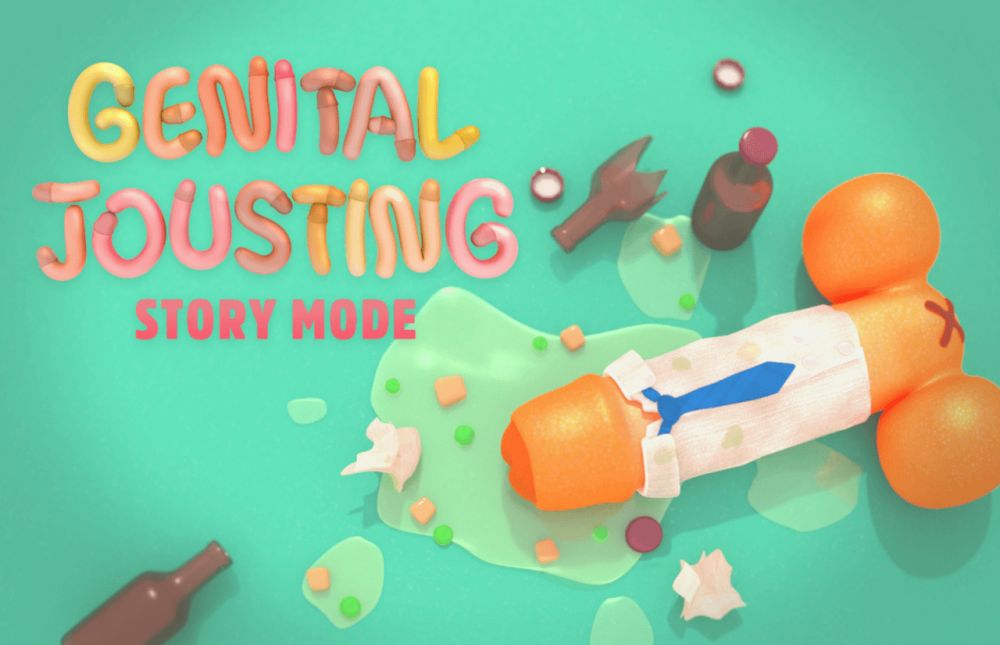 Foreskin Fury was a letdown so I guess we have to go back to the one and only Genital Jousting and see what it did well.

Some would argue that one of the main innovations of GJ are assholes… They decided to “flesh out” the “characters” more and equip them with but holes on their nut sacks. Don’t you just love it when a review can start by detailing with that stuff?

Now, this game is not so much a game, but a collection of funny little minigames. Most of them can’t really entertain for larger periods of time but when you swap them to create variety, or you allow people to pick and choose the ones they like or simply rotate them well enough so it doesn’t tire out on you fast.

There is anything from racing through a cactus field with naked dicks, to eating hotdogs with your asshole. Trying to surprise but sex your friends. So on and so forth.

The individual sessions resolve fairly quickly so the silly and clunky physics becomes endearing rather than a dragged out annoyance. This is a good use of mechanics much unlike Foreskin Fury. Dodgy physics play the role of randomness in this game, and that prevents people from clearly dominating every time by quickly memorizing the “best” moves.

As we know from a wider world. Most good games are enriched by some elements of randomness so they don’t feel stiff, and they can throw out urgent situations that require people to adapt dynamically – hence stray away from an extremely repetitive play where a single number higher determines the victor.

StarCraft 2, for instance, rebalanced their resource gathering because after years they found they are wasting a few minutes of every player’s game in resource gathering where there is no room for play, rather than just carbon copy following a routine and waiting for the time to act.

The other thing that sets Genital Jousting apart is really the effort that went in. It’s not hard to encounter things in the game or in its promotional material that they didn’t have to do, but went out and did anyway, so someone out there gets an extra chuckle.

The controls are tuned. They are not good, they are not bad. They are just tweaked well enough to serve the purpose of the overall play. Of course, this means leaning on silly. Because shoving dicks into each other is very serious and we need laser-sharp accuracy 🙂

When I play with friends, losing to physics is more often the driver of a rematch than anything else.

The sound design delivers and makes the thing funny. I’m picky about music so I play my own.

If you get your parents to join in on the game it can be hilarious.

All and all good fun. Worth every penny.

You can grab a copy here: