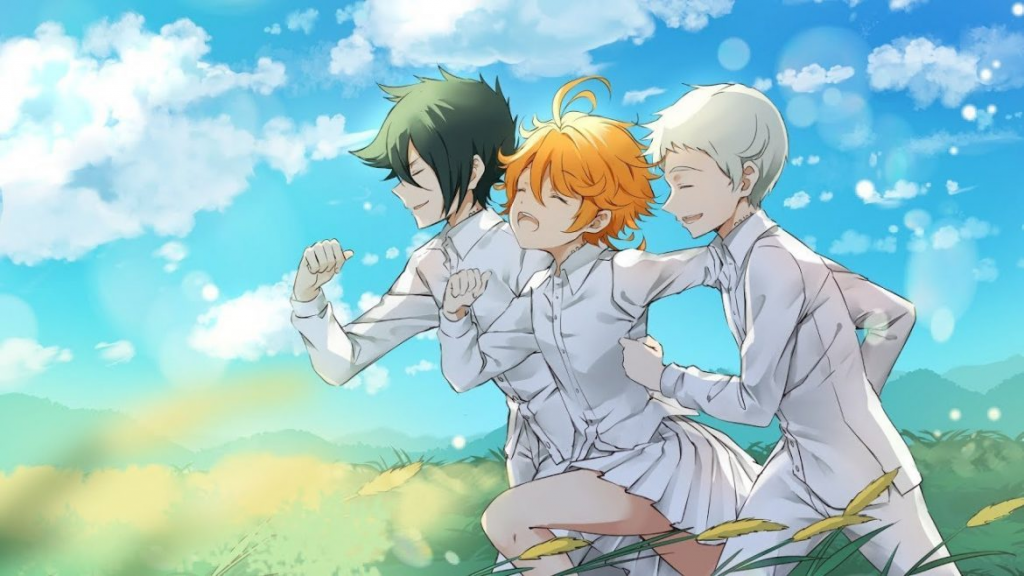 Hi Kinksters! It’s been a while since we’ve talked about anime and I believe I found a good enough candidate deserving a review.

I’ve been an anime fan since my early teens when I stumbled upon Pokemon and Shaman King. Over the years, I’ve watched a ton of anime and read a lot of manga. I’m in no way an expert on the matter, but I’m a big enough anime/manda culture fan to know the tropes and genres and get around to talk about it from my heart.

I love anime that surprises me, be it with a gory twist, or by deconstructing a genre and turning it inside out. And The Promised Neverland (Yakusoku no Neverland) is surely enough an anime that will surprise you. I will be talking about the first season of the anime (12 episodes). I plan on reading the manga as soon as I finish what’s left of season 2 (currently 4 or 5 released episodes). I’ve heard rumors of the anime deviating from the manga, but I always like to look at both as separate pieces of art, and I don’t consider anime an imitation of manga that’s supposed to follow every page and every dialogue line.

First of all, it must be said – If you despise cutesy anime stories involving children, you’ll have to endure the first episode, because the twist they pull on it makes you care for each and every one of those little annoying bundles of joy and tears. But if you’re like me, you will find yourself judging your own choices for the first 15 minutes of episode one. I was very close to turning it off but I remembered my best friend (who recommended it to me) saying that it’s totally worth it. And boy, am I glad that I endured it. This anime pulls a twist on you, that’s heartless, disgusting, and outright fascinating. It’s like a car crash you can’t look away from. I won’t be spoiling the plot for anyone interested in watching it for themselves, but I will talk vaguely about the plot and how it made me feel.

The story starts with an orphanage in the middle of a sunny, bright and grassy field, surrounded by a soothing forest. Orphans until 12 years of age live there, taken care of by their caregiver, who they all call “Mama”. They know that once every few months, one of them gets adopted into a real family and mysteriously never writes back. But they assume it’s because they want to focus on their new life and new family.

All children are homeschooled in the orphanage and take tests and study because they want to one day have a normal life outside the orphanage. The story emphasizes a lot on the feeling of family and utopia in the orphanage, the children are lucky to have so many brothers and sisters, albeit not blood-related. They’re grateful for the food, the joy, and the freedom they experience there and they really live their lives to the fullest.

But everything comes crashing down like the Babylon tower one night, when two of the protagonist children notice that their little sister forgot her plush toy bunny when leaving to get adopted and run out through the field trying to catch up to Mama and their sister. They reach the gate of the orphanage, which they know they’re forbidden to pass through. But worried about their friend leaving without her favorite toy, they decide to go through the fence and give her back her toy. It’s needless to say that what they discover behind that gate changes their lives forever. Everything they thought they lived for is thrown out the window at that very moment.

The plot twist is fucked up, I won’t lie to you. And it’s even worse that all the main characters in the anime are little children. The plot reminds me very much of the Little Nightmares horror game, and the anime turns from a cutesy story about orphans, to a full on survival horror experience, with existential dread, cosmic horror elements, and pure desperation.

I devoured the entire first season in a few hours because I simply couldn’t take my eyes off it. It’s masterfully crafted, with smart dialogue, logical problem solving, exciting scenarios and an overall solid plot. Half of the time you forget that the main characters are children, because their thinking and logic is genius. But later on we find out why.

Overall, the first season of the Promised Neverland is a good choice for your next anime if you like plot twists, drama and horror. I still have the manga to explore, but for now, based on my first impressions, this is a solid addition to the vast world of anime/manga entertainment.