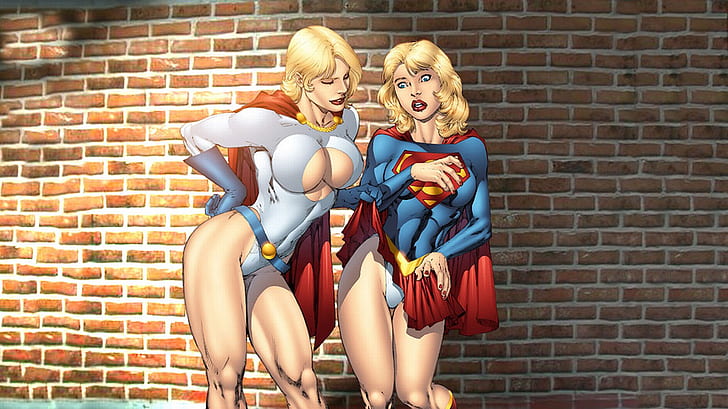 Simple answer: It’s the character, her backstory and accomplishments, the looks she gives and attitude she carries through her adventures. But when you take away all that depth and look only at the stills, there’s still an abundance of sexiness on the pages of most comic books, going all the way back in time through different eras of fashion.

We take a look at the basic fashion decisions of some of the world’s hottest comic book heroines to see what features work better than others. 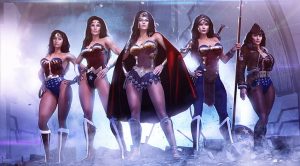 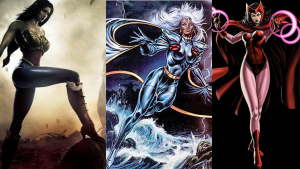 Skirt or No Skirt?

This one’s tricky. On the one hand a beautiful booty is wasted if not seen. Tight pants and shorts are popular for good reason, while the outrageously sexy e.g. Psylocke argues the case for simple, bare-butt leotards. It’s then a matter of preference but on the whole the style is tight yet bulging. On the other hand there’s something super tempting about a miniskirt, and what it barely hides beneath. Take for example Supergirl’s skirt, ruffling in the wind. It seems magically free to dance around her waist, and give you a glimpse of the goods, but no matter what the updraft is like, it never does… tease! 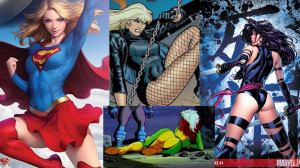 Cape or No Cape?

Capes were originally a clever way to show motion (fight and flight) in a still image. They can also serve a practical purpose like added armor, discount wings (or in Storm’s case, wind turbines?). But talking about originally drawn heroines, capes are not the norm. On the one hand you have the likes of Supergirl, Batgirl and Powergirl, while on the other hand are basically all the rest. There seems to be a consensus that female superheroes don’t need a cape, probably because their hair can show a breeze and covering up the heroine’s rear would be a damned shame. 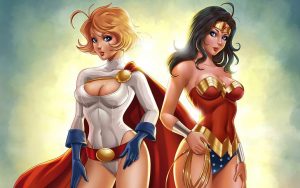 Medium length, flowing hair is by far the going standard when in full dress, while in casual clothes, for some reason the humble ponytail does a lot of work (for fans of Lara Croft aka any straight man with a pulse, it works no matter what she’s wearing). For some heroines like Spiderwoman or Starfire, you never mess with the hair, it is probably even trademarked! In the case of Captain Marvel a haircut symbolized a transformation and even sparked it’s own debates.

Then there’s Catwoman, one of the all time sexiest things to be lifted from DC’s pages, bald headed as a gimp on Christmas. She’s not the only hairless heroine, but between the movies and comics, she is arguably the pinnacle of latex covered hotness. 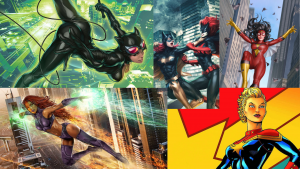 This is another one that depends on factors outside style, since the story demands some figures must hide and some not. But, when are they hotter? This is definitely a question of kink. If pure beauty is the desired look, mask less is the way to go. However, if mystery, deception and kinkiness is what boils the blood, a mask can do some fabulous things. It’s usually one of two things; really extravagant eye shadow, as in the case of Black Cat, or a more subtle acceptance of what a fawning fan looks for in a face, beautiful eyes to pierce your soul, and a pair of lips for everything else.

The truthful answer is, it really doesn’t matter what they wear or how they dress, gorgeous women who can both kick your ass and seduce you to jelly, will (no matter how they are presented) always be super hot. Throw in a whip, bat or skin deep claws and you would have to be a super-man to resist. 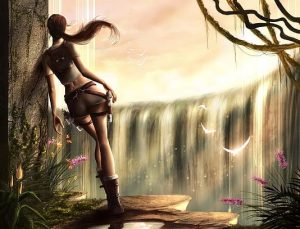